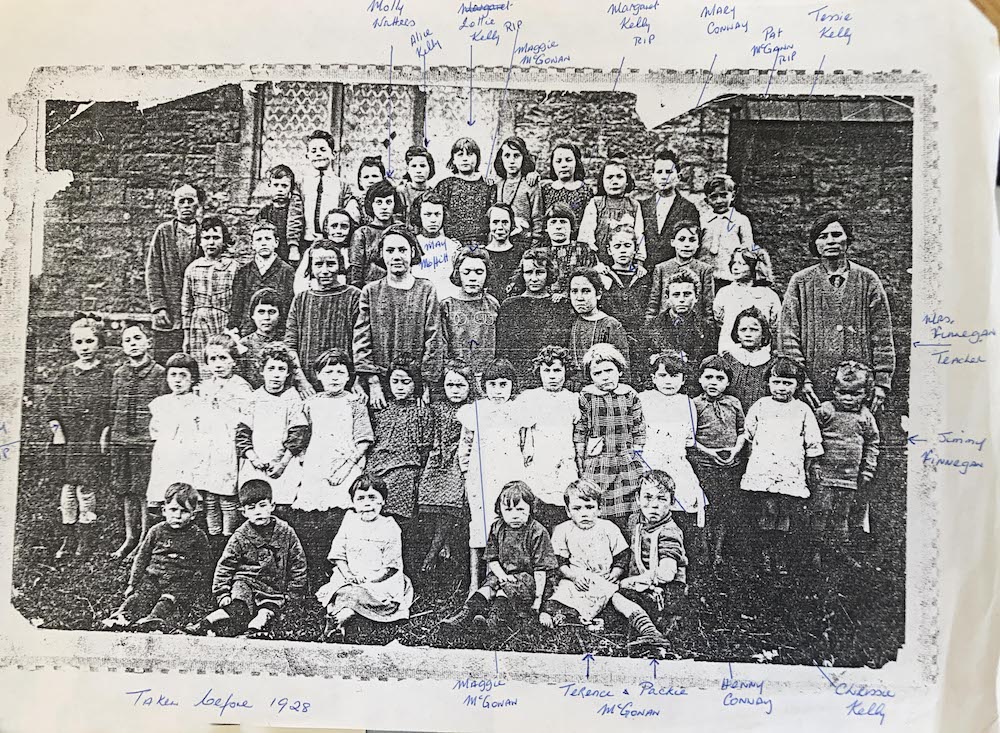 1864:  The old Carns School was built in 1864, the money coming from the Education Co. and partly financed by Lord Palmerston. It is now a private residence, being replaced in 1951 by the existing school.

1951:  The new Carns School was opened on Monday 19th November 1951, here is a brief transcript of the article which featured in The Sligo Champion. 1951:  New School Opened. (The Sligo Champion November 24th, 1951) After countless years of agitation with the Department of Education, a new school was blessed and opened at Carns, Moneygold, Co. Sligo on Monday last at an impressive ceremony at which the Bishop of  Elphin, Most Rev. Dr. Hanley, officiated. The new school will be known as St. Brigid’s School, Carns. The new building, which was constructed at a cost of £4,000 was built by Messrs Cummins, Granard, Co. Longford. With seating accommodation for 64 students the school has two separate classrooms. Behind and in front of the school are spacious play-grounds with a huge shed for the use of students on wet days. Sanitary accommodation has also been provided and the major portion of the playground has been laid with concrete.

1972 : Scoil Naomh Bhríde was closed down by the Department of Education. In 1972, when the then Minister for Education decreed that there was no place in the education system for two-teacher schools, the parents at Carns stubbornly refused to send their children on a bus to a school in Grange, and augmented their protest by employing a local to teach their children, in open defiance of the Department’s edict. They won their three-month battle, two-full time teachers were employed by the Department, and Carns School, with a history dating back to 1864, lived to fight another day.

On Sunday 27th of August 1972, the priest in Grange announced from the altar that Scoil Naomh Bhride, Carns would be closed down permanently and that the chlldren from Carns would be bussed down to Grange N.S. This was the first the parents had heard about the closure. No consultation and no meeting had been called to inform parents of the impending closure.

The parents of the children attending the school called emergency meetings and decided that this situation was unacceptable and vowed to oppose the closure. Protests were held outside the school building. The parental body decided to speak with the Deparment of education and in the interim, they decided to reopen the school as a private school. The parents approached a local woman, Eileen Coyne and asked her if she would be willing to teach the children in the school. Eileen was a past pupil at the school and had in fact read the address of welcome at the official opening of the school in 1951.

Eileen Coyne taught for eight weeks, commencing on 11th Sep 1972. During that time, the parent body covered the substitute costs of the teacher and visited the Department of Education on at least two occasions. The Department of Education sent a deputy head inspector, Mr. Hynes, to assess the situation.  Based on his positive report, the decision was taken to reopen the school. A second substitute took over from Eileen for a number of weeks, Frank Reidy taught until John Kelly was appointed. There were twenty-five children on the roll books on the delayed first day of term of September 11th.

The Department of Education relented before Christmas 1972 and reopened the school. Mr. John Kelly was appointed principal of the school and commenced work after Christmas 1973. Many great grandparents and grandparents of current pupils were actively involved in the campaign to maintain the school at Carns. The same spirit lives on in the area and local people are very proud of their school. The history of the two-teacher school is a testimony the community’s determination to hold on to treasured infrastructure, a triumph for rural resistance

Feb 2008:  When, in 2007, the Department of Education awarded emergency funding to upgrade facilities and modernise the school building, the breakthrough came with a condition — the local community had to raise 5% of the overall cost. Considering that there are just sixteen local families represented on the roll book, and that the sum required to be raised locally amounted to €16,000, it was a tall order. But, inspired by the example of those who had saved the school in tougher circumstances, the parents committee embarked on major fund-raising campaign, the highlight of which was a bed push – ‘Push the Extension’ — which saw parents, staff, past pupils and members of the local community take to the main Sligo/Bundoran road for a marathon collection.Complete refurbishment of the existing school building was undertaken, and the official reopening of the building occurred on Feb 29th 2008 by then Minister for Education, Mary Hanafin. The school had to be vacated for a three-month period to the old Grange Primary School to allow the works to be completed.

2011: Small schools under threat nationally: (Thanks to Mike Healy for this text) In March 2011, the Department of Education published a Report ‘Small Primary Schools Value for Money Review (McCarthy report 2011), reviewing the viability of all schools throughout the country, with fewer than 50 pupils, to examine if they represented value for money. There were huge concerns among parent groups and rural communities that the review would lead to the closure of local schools.

As in 1972, the Carns school community saw this as a potential threat to the future of our school. A hastily arranged meeting for concerned parents and our local community, together with parents from the neighbouring Castlegal National school was organised. Stemming from this meeting,a six-member sub-committee agreed to proactively progress the concerns raised and take steps necessary to gain public and political support for opposition to the proposals.   Information was assembled rapidly and all schools in the county potentially at risk were contacted by the committee, who then organised a public meeting in the Radisson Hotel Rosses Point on 11th April 2011. All local politicians as well as many national representatives were contacted for their support and assistance.

This meeting drew extensive and encouraging support from all over the county and was attended by several hundred people including political and community leaders. Local print and broadcast media assisted greatly before and after the meeting running various articles on the subject. Our efforts were replicated all around the country and eventually the proposals were abolished.

The Hazelwood Haunting: 2017, 2018, 2019: Huge fundraising drive by school parents to raise funds for school facilities. Eamon McAndrew and a hugely supportive parent body organised ‘The Hazelwood Haunting’ for three consecutive years, holding a large event in Hazelwood Forest at Hallowe’en. The school partnered with ‘Friends of Sligo Hospital’ for this event.  With up to 90 volunteers needed for each evening of the event, this was a massive undertaking by the parent body in Carns NS, with families involved at all levels, including catering, costuming, construction in the forest, crowd control, storage, clean-up.

A huge number of families and members from the local community volunteered to help run the event over the three years. Funds raised from ‘The Hazelwood Haunting’ allowed the purchase of the field adjacent to the school for additional space for play facilities for children. Huge thank you to everyone involved for the commitment & efforts needed to successfully run this event over three years.

2021: The school purchased the site adjacent to the school, to provide more play space at the school.

2020-2022: The Department of Education sanctioned an extension to the school building, including a new 80m2 classroom, a new staffroom, an enlarged office, reconfigured existing classroom and full refurbishment of the entire school building. Work started at the school in October 2020 and was completed in April 2021. The school had to be vacated for five months to Cliffoney Hall to allow construction works to proceed. Work was undertaken by Arken Construction, in conjunction with John Fahy, Nolan Quinlan Architects.

The dispute entered a new phase this week when the parents themselves appointed a temporary teacher and the children are now attending unofficial classes in the school.

Meanwhile, a bus service provided by the Department of Education to bring the children to a school in Grange is being ignored by the children, and only three pupils are using the service.

The Mountemple school was picketed by a number of parents and children on Friday morning last. It was then decided to appoint and pay a temporary teacher at full Department rates. Both the teacher and the children have been insured, mothers are helping to organise lunch breaks for the children and fathers have agreed to effect any minor repairs necessary in the school.

“We intend to adhere to this plan until such time as the Minister for Education receives a deputation from the parents”,​said a spokesman. 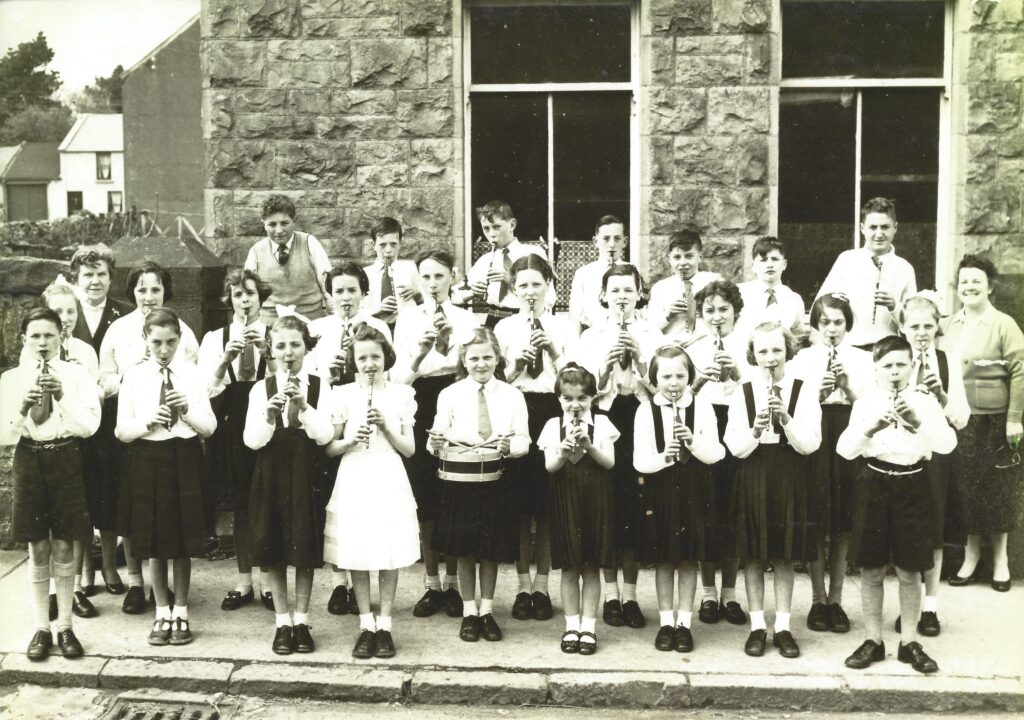 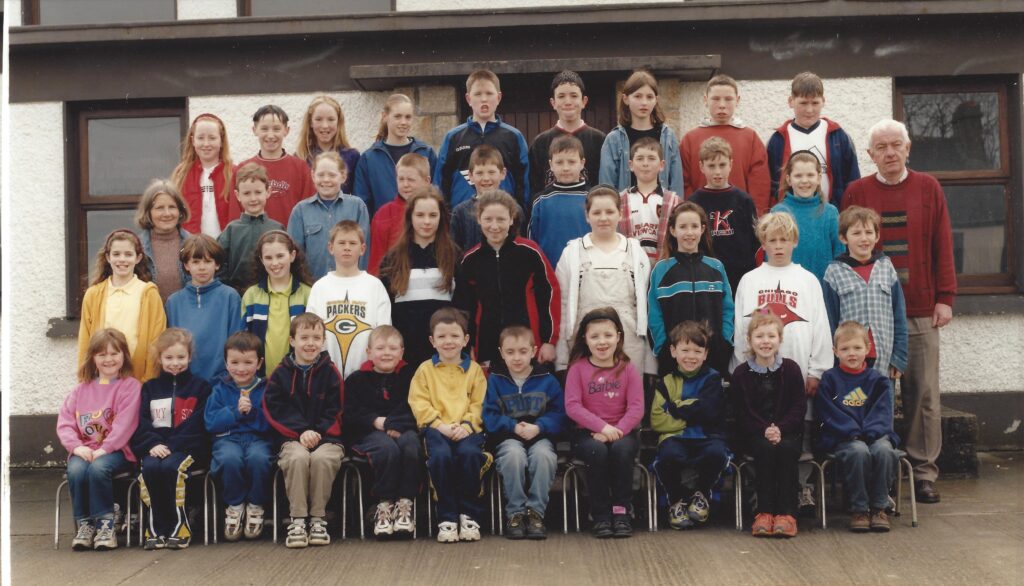 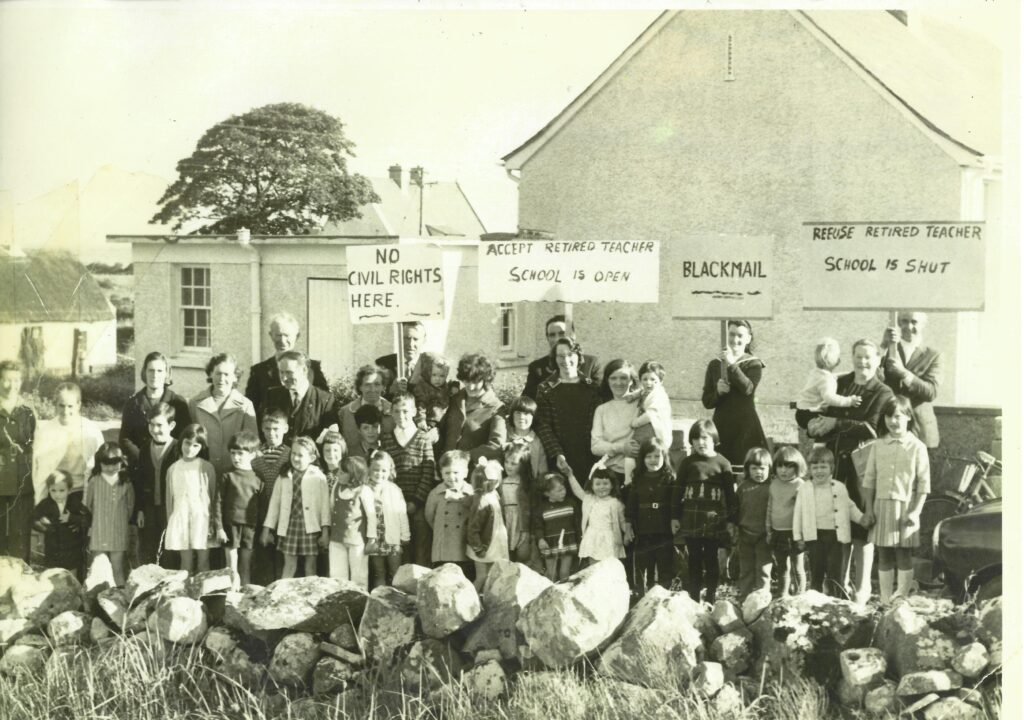 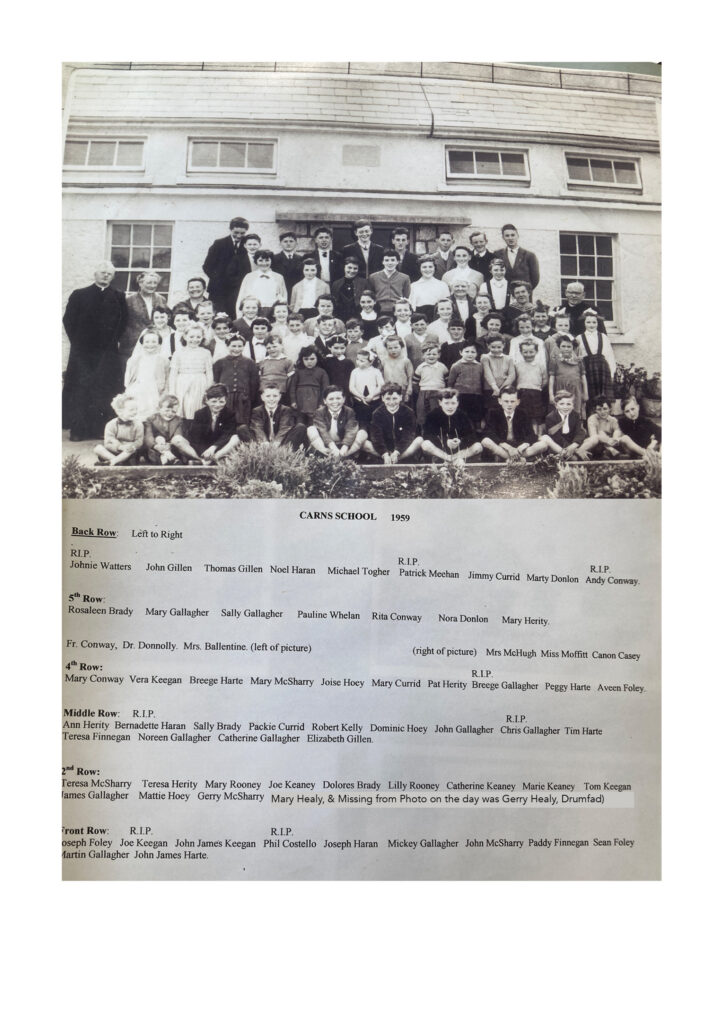